Woyzeck at BAM in october 2008

Woyzeck at BAM in october 2008

“No one blazes a trail of theatrical excitement and thrilling invention quite like the Icelandic actor/director Gísli Gardarsson.”
—Evening Standard (UK) 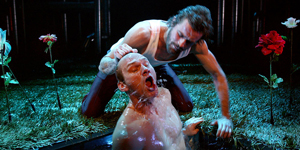 A man thrashes violently in a gigantic water tank, his limbs akimbo, his face a mask of sheer terror. Welcome to Woyzeck’s world as imagined by Iceland’s breakout actor/director Gísli Örn Gardarsson—a place that, thanks to the hyper-athletic cast, explodes with energy. Set to a rollicking score by cult rock legend Nick Cave and The Dirty Three’s violinist Warren Ellis, this is a Woyzeck for the angst-ridden 21st-century, a stunningly visceral take on Georg Büchner’s classic tale of honorable intentions gone tragically wrong.

Frantic to support his mistress and her young son, Woyzeck succumbs to a series of gruesome scientific experiments which only increases his mounting paranoia and fear that his Marie is having an affair. She is, of course, with the Drum Major, a charismatic sadist who swings menacingly from a trapeze, baiting and beating the hapless Woyzeck. The black-cloaked chorus intones forebodingly, bearing witness to all that unfolds. It’s too much. Woyzeck is pushed to the brink and, thanks to Gardarsson and his intrepid company, we go along—mesmerized and breathless—to the inevitable, watery finale.

Co-produced by Reykjavik City Theatre, the Young Vic and Bite:05, Barbican as part of Young Genius.