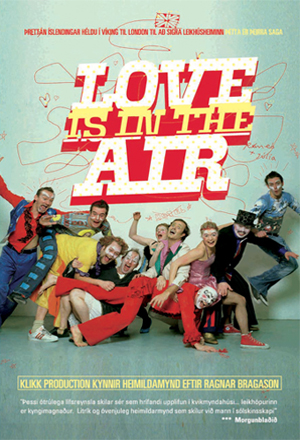 “…this riveting experience generates a fascinating
experience at the movies…the theatre group is par excellence…
a colourful and original documentary that will leave you with
a smile on your face.”
SV – Morgunbladid***

LOVE IS IN THE AIR – DOCUMENTARY a film by RAGNAR BRAGASON

LOVE IS IN THE AIR is a documentary about a group of actors that dream the impossible and try to make it come true.  With a unique and acrobatic production of the greatest love story of all times, they travel to the home country of the Bard with the plan to conquer the cradle of theatre, London.
In September 2003, thirteen people from Iceland set out for an adventure.  Their goal was to stage their successful, Icelandic production of Romeo and Juliet in the historically renowned Young Vic Theatre in London.
The group hijacks two floors of the shady Albany hotel for three months and then begin tireless rehearsals for the premiere.  But life in London doesn’t come easy.  Trouble on the stage and despair backstage is documented as we follow the group through the good times and the bad.
Will this ambitious theatre group from a small, volcanic island in the North manage the impossible and succeed in the big world?  Or will they be forced to return home with their tails between their legs?

LOVE IS IN THE AIR is a incredible story of achieving the impossible
through perseverance and courage.

Love is in the air on IMDB