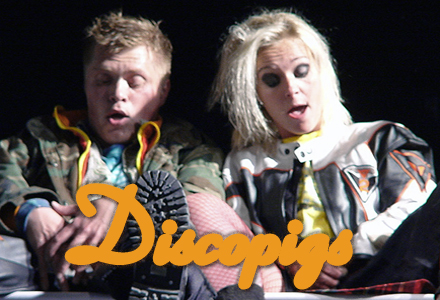 It was the 18th of august 2001 that Vesturport’s first official performance took place, in a former machine shop at Vesturgata in Reykjavik. Vikingur Kristjansson, had recently gratuated as an actor and came across the play, Discopigs by Enda Walsh, by coinsidence. The powerful story, and its beautiful core hidden in Pig’s and Runt´s ugly and violent world impressed him. He contracted another Vesturports member, Nanna Kristin Magnusdottir and a young director Egill Heidar Anton Palsson, who at that time was studying theater direction in Copenhagen. Magnus Thorbergsson, dramaturg, was also in the team.
The result was a 1 ½ hour powerblast. DJ Arni Einar Birgisson (DJ Arni E) was on stage with the actors, making a live sound for the performance.
Vikingur Kristjansson played Pig, Nanna Kristin Magnusdottir played Runt.