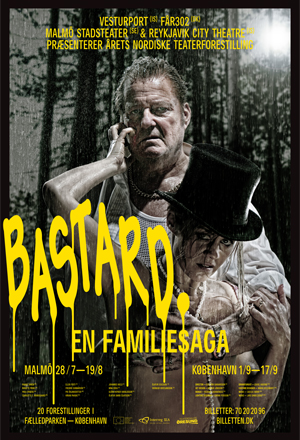 “Dramatic, yet humaristic and ultimately – horrific!”
The Sunday Times

BASTARD is a story dealing with a dysfunctional family. A tale of a father, his four sons and their partners. The sons are not close to their father even so, after many years of separation, they receive an invitation to his upcoming wedding. The father has an eerie effect on his surroundings and the reunion becomes increasingly disturbing. The famous Danish actor Waage Sandø plays the leading role with an inspired malice and intensity.

The production is directed by Gisli Örn Gardarsson. Börkur Jónsson is the set designer. BASTARD – a family chronicle is written by American screenwriter Richard La Gravanese in collaboration with Gardarsson. This is Richard La Gravanese’s full length theatre debut! La Gravanese is recognized for moviescripts such as; Bridges of Madison County, The Horse Whisperer, Oscar-nominated The Fisher King and recently; Water for Elephants.

The production is inspired by Dostoyevsky’s the Brothers Karamazov. The music is composed by the internationally acclaimed Danish-Swedish music-duo Cæcilie Norby and Lars Danielsson, who will perform live on stage. The couple is composing music for the stage as an integrated part of the narrative for the first time. This collaboration uniquely brings together Nordic theatre with the utmost talents within Danish jazz.