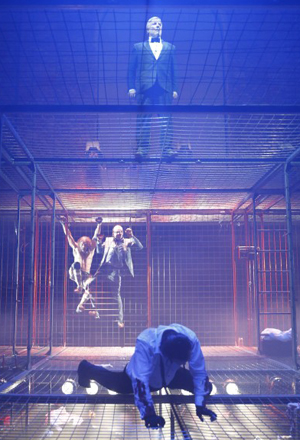 The Tempest by William Shakespeare

The Tempest is set on a remote island, where Prospero, the rightful Duke of Milan, plots to restore his daughter Miranda using illusion and skillful manipulation. He conjures up a storm, the eponymous tempest, to lure his usurping brother Antonio and the complicit King Alonso of Naples to the island. There, his machinations bring about the revelation of Antonio’s lowly nature, the redemption of the King, and the marriage of Miranda to Alonso’s son, Ferdinand.

Gisli Örn Garðarsson, who brought ” Metamorphosis” to our stage in 2012, has created his own adaptation and with his team of Börkur Jónsson (set), Björn Helgason (lights), Jan Fazbender (music) and Filippía Elísdóttir (costumes) they us the themes of horror, violence and revenge as a source for their staging.

Due to it’s violent nature, the production is not recommended for audiences under 16 years of age.