The Heart of Robin Hood 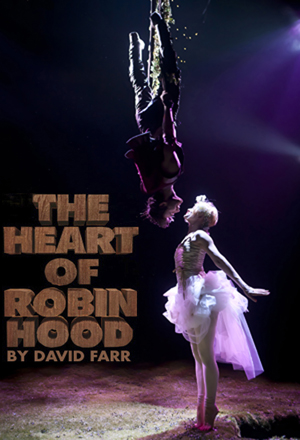 “Gisli Örn Gardarsson has an incredible imagination and just the right sense of fun”
whatsonstage.com

“David Farr, who has written this smashing new treatment of the legend”
Evening Standard

”An RSC family show with a difference…staged with such verve and invention that it is impossible not to surrender with it.”
Guardian

THE HEART OF ROBIN HOOD by David Farr

Tread carefully through the forest…
The notorious Robin Hood and his band of outlaws steal from the rich, creating a fearsome reputation amongst those who dare to travel through the mighty forest of sherwood. But they do not share their spoils with the poor and are unloved by the people, who must also pay unfair taxes to the evil Prince John as he plots to steal his brother’s crown. In this time of chaos and fear, it is down to Marion to boldly protect the poor and convince Robin that he must listen to his heart if they are to save the country.
A spectacular new production of a great English legend written by RSC Associate Director David Farr and directed by Gisli Örn Gardarsson, the Artistic team behind Metamorphosis, currently touring worldwide.