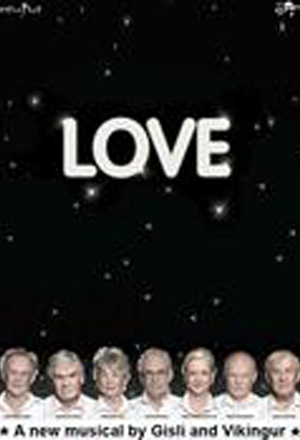 “A surprise alternative hit. This is the best show the Lyric has staged under David Farr… I ADORED IT.”
Daily Mail

”This little discovery is one of the best ways to spend an involving, if mildly tearful, night in London”
The Observer

”Irresistable. The performance of Perfect Day is this production’s context is one of the most beautiful moments I have ever experienced in theatre”
Þ.T. – Morgunbladid

Love – The Musical is Gisli Örn Gardarsson’s playwriting debut. Co written with Vikingur Kristjansson. Sex, medication and rock’n’roll hits the stage in this extraordinary production which examines passion, romance and sex among the over-70s.
The story is set in a home for the elderly featuring a subject not normally approached when life in an old people’s home is tackled: Sex.
Gisli, who worked in an Old People’s Home from ’93-‘94 says: ”It is one of the most important show’s I have done because the issues are real.  It was all there, in front of my eyes. And it celebrates life.  What if you experience the greatest love of your life when you’re 70-80?  What else can you do but sing about it?”
Already a hit in Iceland, an adaptation of the play ran in Korea for six months. The already staged UK version was adapted by the Lyric’s own Artistic Director David Farr when he saw a local London 25 strong ensemble: aged between 62 and 83.
Love – The Musical goes far beyond any political fad or theatrical manifesto. The musical is a contemporary choric celebration of tender humanity and love in the context of ephemeral existence. It offers the same rich collaboration as our adaptation of Kafka’s Metamorphosis which has run as a sell-out success all over the world since 2006.