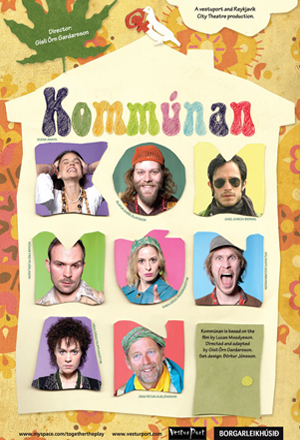 Gisli Örn Gardarsson created an adaption based on the critically acclaimed film Together by Lucas Mooydsoon.
The year is 1970. A housewife Elisabeth gets tired of her abusive and drunken husband Rolf and moves with her teenage daughter Eva
to the hippie community called Together where her brother Goran lives. Goran is a good man, who has an open relationship with his
girlfriend, but does not feel comfortable with the situation. Elisabeth and Eva are welcomed by the group composed of a new-lesbian,
her ex-husband and their young son, an idealist communist from Mexico, a couple of vegetarians and a gay man in search for the love of his life. With the new-arrivals in the commune, lives of the members change. Meanwhile, Rolf misses Elisabeth and his daughter, stops drinking and tries to approach Elisabeth again. It´s very much an ensemble production where all the actors are visible in the set at all times. The hippies in the commune are also a band. Hence all the actors deliver songs from the period live on stage.
Together premiered at the City Theatre in Reykjavik in February 2008