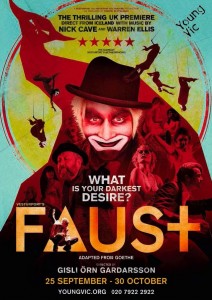 FAUST is one of the 40th anniversary shows at the Young Vic.

FAUST was originally premiered at the Reykjavik City Theater in January 2010. It has gotten great reviews from critics and has been played to a full house for the whole run in Iceland.
September 25th – October 30th 2010
More info