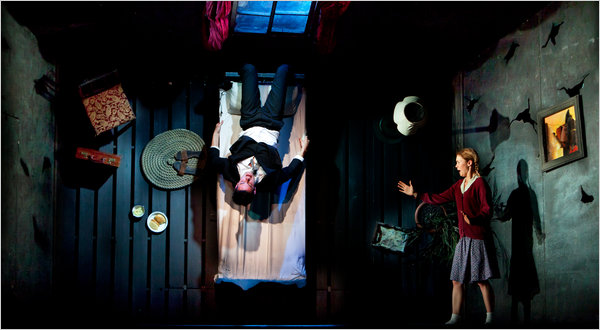 THEATER REVIEW | ‘METAMORPHOSIS’
Inhabiting a Six-Legged Nightmare: What Becomes a Monster Most?

Maybe it’s just a ripple effect of the “Spider-Man” obsession gripping Broadway, but Gisli Orn Gardarsson’s astonishingly athletic interpretation of the traveling salesman who awakes one morning transformed into a bug in “Metamorphosis” seems more arachnid than insect.

In any case, Julie Taymor should take note. There’s persuasive evidence onstage at the Harvey Theater that it doesn’t take $65 million and industrial-strength rigging to make a humanoid critter effectively leap and crawl across walls and ceilings.

That man-sect is the beleaguered central figure in what is described as “a six-legged nightmare by Franz Kafka,” a haunting adaptation of his 1915 novella. First seen in 2006 and now having its American premiere at the Brooklyn Academy of Music, the show has been conceived with visual imagination and startling physical power by the Icelandic company Vesturport Theater and the Lyric Hammersmith of London.

In a wordless opening that sets the tone for a striking marriage of cinematic atmosphere and theatrical artifice, Nick Cave and Warren Ellis’s delicate score accompanies the precisely choreographed morning rituals of the Samsa family in their Prague living room.

When Bjorn Helgason’s meticulous lighting redirects our attention, we realize something is askew in the room upstairs, which is turned on its side, giving us an overhead view. In this gloomy space, its walls pockmarked by deep crevices, the bed stands vertically, resembling both a straitjacket and cocoon from which Mr. Gardarsson’s mutated Gregor slowly emerges.

The masterstroke of the production, adapted and directed by David Farr and Mr. Gardarsson, is that Gregor in his rumpled gray suit looks and sounds to the audience like a mild-mannered human. But to his family, he is a hideous monster, his plaintive attempts to communicate causing them to shield their ears in pain.

The family’s attitude toward him spirals from revulsion into hatred, largely bypassing pity. This gives the surreal scenario a tragic majesty that works in affecting counterpoint to its farcical, Mittel-European sitcom side.

When the Samsas are forced to find employment, even Greta stops tending to her brother, eventually turning on him in a scene of unsettling violence.

As Mr. Gardarsson, a former gymnast, scrambles around his cell, over furniture and down the banister into the unwelcoming room below, his dexterity and control are mesmerizing. But there’s real pathos beneath the physical stunts. Seeing him pinned into a high corner gives a wrenching sense of a terrified creature being drained of life.

Borkur Jonsson’s set — full of cleverly disguised strategic grips and trampoline flooring on the upper level — is a tremendous asset in a performance that calls for challenging acrobatics without the aid of wires or harnesses.

The writers have shifted the story to the 1930s, reshaping this alienation fable into an explicit if somewhat forced allegory for the coming genocide in Europe.

That subtext is hammered in dialogue about the moral rewards of hard work and exercise, and the need to rid society of its undesirables. But Jonathan McGuinness brings such ferocious intensity to the prospective lodger who expresses those views that the scene acquires conviction.

The actors playing Gregor’s self-serving family convey the fickleness of their affections with chilling efficiency, even if their declamatory delivery and studied movements can grate. But in 80 minutes of concentrated storytelling that is as much Brothers Grimm as Kafka, the affectations barely matter.

A version of this review appeared in print on December 3, 2010, on page C3 of the New York edition.