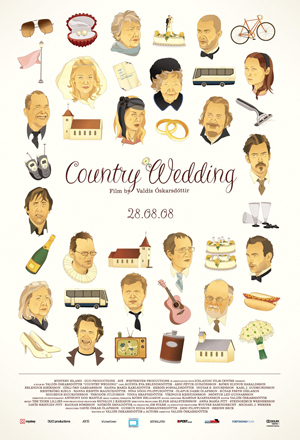 “The story can be compared to a casserole that sizzles until everything finally boils over”
24 Stundir,

Mystery Island, Duo Productions and AVE in co-production with Vesturport and KUKL present

Ingibjorg, the bride and Bardi, the groom, have decided to get married after living together for three years. The ceremony is to be held in a small church, an hour’s drive from Reykjavik. Ingibjorg wants to keep to the tradition of not letting the groom see the bride dressed in white until at the ceremony. Therefore, Ingibjorg, Bardi and the guests – family and close friends and not so close unwelcome friends, drive off in two buses with champagne and a wedding cake. No one knows exactly where this country church is located except for Bardi, who got the direction from the priest over the phone. It had sounded rather straight forward that is straight ahead, down the road leaving out some turns. However, Bardi is claustrophobic and the convoy cannot take the normal route through the tunnel under the Whale fjord. After driving for hundreds of miles around the fjord they are running out of time and decide to take a short cut. After some further driving they discover that they are lost.