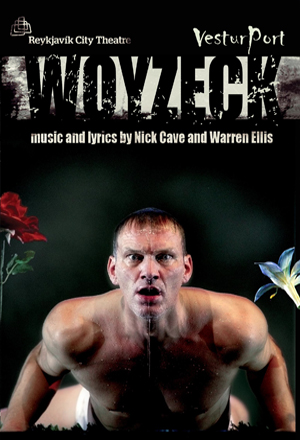 “This Icelandic version has overpowering visual and aural bravura, showing how Buchner’s masterpiece can be turned into an assault on contemporary capitalism”
The Guardian

Vesturport and Reykjavik City Theatre presents a Co-production with the Young Vic and
barbicanbite05 as part of  YOUNG GENIUS. With additional commissioning support from HetMuziektheater, Amsterdam

In this Vesturport and Reykjavik City Theatre production of Buchner’s Woyzeck charts the downfall of a young man struggling to make the best from what life has dealt him. A hostage to fortune, class and his sadistic superiors, Woyzeck’s fate is played out in a series of nightmarish encounters. He stumbles through a world of macabre carnival, sexual betrayal and cruel oppression, pursued by the demons of his own paranoid fantasies. Pushed beyond breaking point, Woyzeck’s last love-crazed act destroys the only thing he truly cares for.
Gisli Örn Gardarsson’s adaptation and direction, with original music and lyrics by Nick Cave and Warren Ellis – was a triumph when it opened at the Barbican, London in 2005 and has since been seen in Reykjavik (Iceland), Salamanca (Spain), Aarhus (Denmark), Ludwigshafen (Germany), New York (US), Amsterdam (The Netherlands) and Seoul (S-Korea).