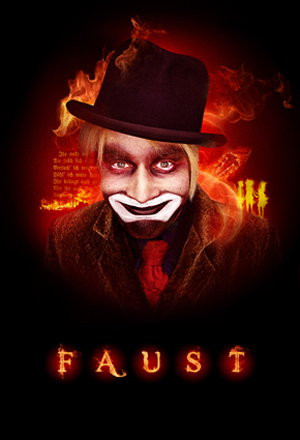 “Thrilling aerial staging… What’s rare and great is the marriage of script and spectacle.”
Time Out

“Show of the week!”
Caroline McGinn – Time Out

Iceland’s trailblazing Vesturport Theatre Company in co-production with the Reykjavik City Theatre burst onto the Young Vic stage with a wildy inventive new production. Co-written and directed by Gísli Örn Garðarsson (Romeo and Juliet, Young Vic; Woyzeck, Young Vic/Barbican; Metamorphosis, Lyric Hammersmith and UK tour) with music by world renowned musicians Nick Cave and Warren Ellis, this is a thrilling, circus-inspired UK premiere.
The universal tale of a man selling his soul to the devil has never been imagined quite like this before.
Loud, fast, explosive, poetic and acrobatic, Vesturport’s Faust is hilarious and terrifying with a score ranging from devilish glam-rock to soulful ballads.
Musician and songwriter Nick Cave is best known as front man of Nick Cave and the Bad Seeds.  He has collaborated with the accomplished violinist and composer Warren Ellis for fifteen years.  The duo composed the scores for Vesturport’s Metamorphosis and Woyzeck as well as film soundtracks for The Road, The Proposition and The Assassination of Jesse James by the Coward Robert Ford.