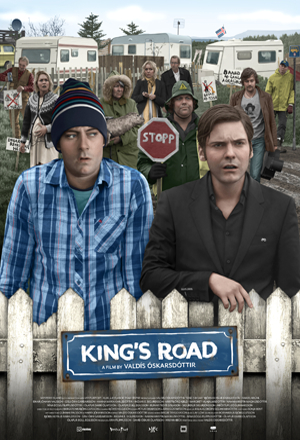 “The storyline is very amusing, at times hilarious and the group of actors all deliver their crazy characters so effortlessly that the film is light and humorous without the tragic undertone being suffocated”

The story takes place in a rundown trailerpark in Iceland. After 3 years abroad Junior returns to Iceland with his set of problems hoping that his father can sort them out. But his homecoming isn’t quite what he had expected.
King’s Road is a story about a group of individuals that ends up at the same place and their troubled past is the reason why they are staying at this place. The story takes place over five days and during that time we learn how they got there and why and at the end all of them have to make up their minds and make decisions if to go on with their lives as it is or take action.

Whom can you depend on if you can’t depend on your family?