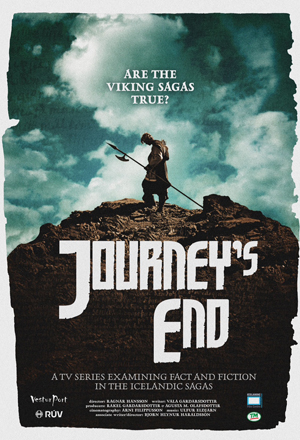 This documentary TV series explores the truth about the Icelandic Sagas. A few events are selected from the Sagas and brought to life in 6 episodes. History, mythology and science join forces to shed some light on these extraordinary events.
The Icelandic Sagas are considered among the world’s greatest literary treasure as they represent a valuable resource to the Viking age society and culture. The credibility of the Sagas has been questioned throughout the years, due to many larger-than-life heroes and stories of epic battles. But can we uncover the truth by following our ancestors footsteps and let the archaeology speak for events that took place over a thousand years ago?
The aim of the series Journey’s End is to explore the truth behind the Icelandic Sagas by bringing several events to life. History, mythology and science will join forces to shed some light on these extraordinary events. Each episode will recap a selected event from the Sagas that will be examined in some detail without going into academic research but merely by examining the story itself and the trail it takes by looking closely at the ruins, nature and local word of mouth.