Read about Woyzeck in the New York Times….

When the Icelandic director Gisli Orn Gardarsson approached the Australian rocker Nick Cave to write songs for his new production of “Woyzeck,” it wasn’t because Mr. Cave happens to have a long catalog of songs about murder, madness, obsessive love and death. Those topics all figure in Georg Büchner’s bleak, fragmentary and prophetically modern 1837 play, “Woyzeck,” to be performed by Mr. Gardarsson’s troupe, Vesturport Theater, on Wednesday, Friday and Saturday at the Brooklyn Academy of Music

The title character of “Woyzeck,” a credulous Everyman driven to insanity by authority figures and jealousy, wouldn’t be out of place in one of Mr. Cave’s songs. “You can’t help but respond to that story,” Mr. Cave, 51, said by telephone from Chicago, where he was on tour with his band, the Bad Seeds. “It works on the double punch. You’re kind of hit from behind all the time — it sneaks up and hits you.”

But Mr. Gardarsson made the literary connections later. In a telephone interview from Dublin, where he was directing and performing in his adaptation of Kafka’s “Metamorphosis,” he said he just happened to see a concert in Iceland by Mr. Cave and the Bad Seeds and was simply swept up in the sound, which overlays blunt, three-chord rock with improvisations that can be noisy or rhapsodic and includes the violin of Warren Ellis, a member of the Bad Seeds since 1995 and a collaborator on the songs for “Woyzeck.” 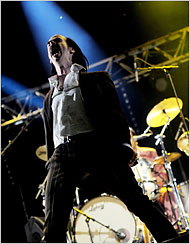 “Witnessing the energy they had onstage, I thought I would like to have a violinist like Warren in the production,” Mr. Gardarsson said. “And then I thought, ‘Hang on — what if I just ask these guys to do the music for ‘Woyzeck’?”

He pursued Mr. Cave. “He has this enormous energy,” Mr. Cave said. “He somehow got my personal phone number and hunted me down. I responded to his enthusiasm, but I had no idea what the thing was going to be like at all.”

Mr. Cave, Mr. Ellis and Mr. Gardarsson had long conversations, but the Bad Seeds went on tour without Mr. Cave’s committing to write songs. Mr. Gardarsson almost gave up. Then, one Saturday, he got a telephone call from Mr. Cave.

“He said: ‘Do you have some time to listen? I don’t have a computer to send you anything,’ ” Mr. Gardarsson recalled. “So he put his phone on his piano and played me a song that he had composed.”

It turned out that Mr. Cave was happy writing songs to order. “I have a particular talent of writing to spec,” he said. “In fact, I’m much better at that than sitting down to write my own songs. You’re just given your theme and given your idea. You don’t have to worry about original creation. You just sit down and do the work.”

Mr. Cave was familiar with “Woyzeck” from the somber 1979 film adaptation by Werner Herzog. “I have the Herzog version burned in my mind, pretty much,” he said. “That’s an extraordinary thing. It’s so brutal. This version is very, kind of, festive. It’s very different, a complete surprise — physical and youthful and virile.”

Mr. Gardarsson is a former championship gymnast who studied acting at theater school, then turned to directing and was a founder of the Vesturport Theater troupe, based in Reykjavik, in 2001. “Woyzeck,” performed in English, is the company’s United States debut, which is part of the Next Wave Festival at the Brooklyn Academy of Music. It met with repeated acclaim in Britain. Mr. Gardarsson’s adaptation of “Romeo and Juliet,” which received rave reviews in London in 2003, had actors bouncing on a trampoline and swinging from a trapeze.

His “Woyzeck,” which has been performed in Iceland as well as in Britain, takes place on a stage set with a factory’s stylized industrial piping and a row of aquariums representing the river, in which characters splash, grapple, make love and drown. Various performers are airborne, including a violinist modeled on Mr. Ellis, and a soldier, Büchner’s crude Drum Major, who dives into view on a bungee strap.

Mr. Cave and Mr. Ellis came up with stomping rockers, Germanic waltzes and surprisingly tender love songs, many with hovering layers of violin lines. “Me and Warren have all this music floating around that we are creating all the time,” Mr. Cave said. “There’s a lot of it floating around in ‘Woyzeck.’ ”

Some of the play’s most brutal action is accompanied by “the most beautiful, haunting, liquid sounds,” Mr. Cave said, adding, “I’ve always enjoyed lulling the audience into a false sense of security.” Since they wrote the “Woyzeck” songs in 2005, Mr. Cave and Mr. Ellis have also provided instrumental music for Mr. Gardarsson’s “Metamorphosis” and are about to write songs for his “Faust.”

Mr. Cave isn’t the first major rock songwriter to take on “Woyzeck.” Tom Waits wrote songs for an adaptation by Robert Wilson that came to the Brooklyn Academy of Music in 2002, and released them on his album “Blood Money.” Neither Mr. Cave nor Mr. Gardarsson heard the Waits songs until their own version was complete, they said. When Mr. Gardarsson did, he said, he heard similarities. He traces them back to the play itself.

“There is a haunted melody there from Büchner’s side already,” he said. “I think we managed to get on that wavelength.”

“Woyzeck” plays on Wednesday, Friday and Saturday at the Brooklyn Academy of Music, 30 Lafayette Avenue, at Ashland Place, Fort Greene; (718) 636-4100 or bam.org.